Genious is misunderstood as a bolt of lightning. 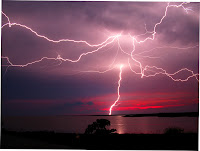 Here's something interesting I came across from Seth Godin.  Several things have got me thinking recently about innovation and taking creative risks, even with the possibility of failure- and I'm convinced that I should fail more often.

Anyway, take a minute for this one...

"Genius is the act of solving a problem in a way no one has solved it before. It has nothing to do with winning a Nobel prize in physics or certain levels of schooling. It's about using human insight and initiative to find original solutions that matter.
Genius is actually the eventual public recognition of dozens (or hundreds) of failed attempts at solving a problem. Sometimes we fail in public, often we fail in private, but people who are doing creative work are constantly failing.
When the lizard brain kicks in and the resistance slows you down, the only correct response is to push back again and again and again with one failure after another. Sooner or later, the lizard will get bored and give up." -Seth Godin
Posted by Shawn McGrath at Saturday, February 27, 2010