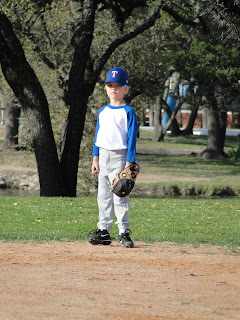 Second base.  The in-between.  The connector.  That less-glorious spot in the middle.

It's spring now, and with spring comes America's favorite past time- baseball.  I love this pic of my son this year in his first season of T-ball.  There he stands at second base, waiting for a grounder to chase down, pounce upon, and lob in the direction of first base.

Second base, in particular, is the place on the field that doesn't get much glory, though.  Arriving on first is a time for celebration in a wow, nice hit sort of way.  Third base is where you go right before you burst across home plate to score for your team.  Second base, however, is sort of a ho hum place to be.  Even the second baseman in the field doesn't seem to get much respect in comparison to the shortstop (who is great with the glove), the third baseman (who takes hard hits off of his chest and has a good arm), the first baseman (who can also hit homers), and the pitcher (who feels like the president of the team).

I wonder if the disciples felt like they were in between when it came to doing things with and for Jesus.  We know that they really did want to be the pitcher at times.  Several scenes in the gospels show them jockeying for postion wondering, "Who is the greatest among us, anyway?"

We even see a mom get in the mix, demanding playing time for her two boys in Matthew 20:20-28.  "My sons are great pitchers.  C'mon Jesus, make them stars!"

Jesus' response was classic.  "You know that the rulers of the Gentiles lord it over them, and their great ones exercise authority over them.  It shall not be so among you.  But whoever would be great among you must be your servant, and whoever would be first among you must be your slave, even as the Son of Man came not to be servd but to serve, and to give his life as a ransom for many."

As for me, I often find myself wanting to not be at second base.  I don't want to be at the in between place on the base path.  I don't want to play the position that doesn't get a lot of glory and accolades.  Honestly, I'd rather be in the most glorious spot that takes the least amount of work.  Maybe I could play pitcher in a game that uses a pitching machine? Prestige, without the effort!

Jesus' perspective hits me like a fastball between the eyes.  "The greatest among you must be your servant, and whoever wants to be first among you must be your slave."  It's the picture of servant-leadership.  Actually, it's more than that... it's slave-leadership, meaning that the leader is actually owned by everyone. The highest position is also the lowest position.  It means playing second base because it's a pivitol place on the field that helps the team ultimately win- and loving it.  It's even playing the role of pitcher, all the while being overwhelmingly aware of the importance of every other positon on the field and the crucial role that they play. It's demanding to ride the pine while knowing you're about to win the MVP.

The highest position is taking the lowest position.  The Son of Man came not to be served, but to serve.  He came to give up his entire life, so that others could find theirs.