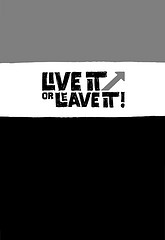 Time to unpack some more of the book Rework, from the founders of 37signals.  Great stuff.

"There's a world of difference between truly standing for something and having a mission statement that says you stand for something.  You know, those "providing the best service" signs that are created just to be posted on a wall.  The ones that sound phony and disconnected from reality.

"Imagine you're standing in a rental-car office.  The room's cold.  The carpet is dirty.  There's no one at the counter.  And then you see a tattered piece of paper with some clip art at the top of it pinned to a bulletin board.

"It's the mission statement:
Our mission is to fulfill the automotive and commercial truck rental, leasing, car sales and related needs to our customers and, in doing so, exceed their expectations for service, quality and value. We will strive to earn our customers' long-term loyalty by working to deliver more than promised..."

You get the point. And, if you're like me,  you've probably had this happen to you and wondered if they think you will just believe them despite your experience.


To pick it back up...."The words on the paper are clearly disconnected from the reality of the experience.  It's like when you're on hold and a recorded voice comes on telling you how much the company values you as a customer.  Really?  Then maybe you should hire some more support people so I don't have to wait thirty minutes to get help. Or just say nothing.  But don't give me an automated voice that's telling me how much you care about me.  It's a robot.  I know the difference between genuine affection and a robot that's programmed to say nice things.  Standing for something isn't just about writing it down.  It's about believing it and living it."

I think that's pretty funny.  I can also identify with it, unfortunately.  I've often put the cart before the horse with these types of situations.  I rephrase things to help give vision and then just pray that it comes true.  Like naming your kid Valiente because you want him to become brave someday.  It's possible, but not very likely without years and years of extra attention and shaping toward that virtue.  More often, what happens is that you name your son and then who he becomes represents that name for people (good news for Bill).  The same is true with a mission statement or any group of words that we hope will move us ahead.  Figure out what is actually happening that you like, what the good part of your identity is, and then package that to represent you or your vision in a way that moves you out to become more and do something meaningful.

When I was a Director on campus, I thought I had a brilliant idea.  As a result, we tried to form a team of student-leaders, calling them the "EXP Team" because we wanted them to experience some things... including a fruitful experience of the gospel and a fruitful experience sharing it with people who didn't understand it for themselves.  One big problem (and there were a few) was that their experience didn't match up with what we said they would experience- and we scrapped it after a few painful semesters.

Anyone who was a part of it will remember more of the experience was eating extra thick ham sandwiches from J's Deli and polishing it off with a jumbo candy bar from our gracious hosts.  Those things were nice, but we had hoped they'd experience much more.  Because we didn't put enough in place to move us toward those specific experiences that we had hoped for, it didn't work.  I should note that there were actually some good things that happened with the EXP Team, including what we learned that helped us do what we tried next... that actually did work.

"Standing for something isn't just writing it down.  It's about believing it and living it."
http://37signals.com/
Posted by Shawn McGrath at Thursday, February 10, 2011