I came across a book recently that was difficult to put down.  Rework.  On a flight back from Denver spending time with my dad as he recovered in the hospital, I devoured it.  Not exactly sure why I flew from Denver to Phoenix to Austin.  A minor oversight on my planning with Southwest.  But, I made the best of it, anyhow.  So, mostly for me to process and connect it to my world… I’ll input a few chapters (more like short blurts) here and then do my best to connect it to developing leaders in the context of team.  Here’s my first stab.  (And if anyone from 37 Signals is a part of my massive following of a dozen or so readers, I’d like to give you a personal shout out for the insight.) 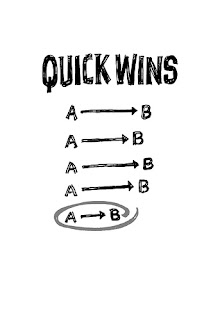 “Momentum fuels motivation.  It keeps you going.  It drives you.  Without it, you can’t go anywhere.  If you aren’t motivated by what you’re working on, it won’t be very good.

The way you build momentum is by getting something done and then moving on to the next thing.  No one likes to be stuck on an endless project with no finish line in sight.  Being in the trenches for nine months and not having anything to show for it is a real buzzkill.  Eventually it just burns you out.  To keep your momentum and motivation up, get in the habit of accomplishing small victories along the way.  Even a tiny improvement can give you a good jolt of momentum.

The longer something takes, the less likely it is that you’re going to finish it.

Excitement comes from doing something and then letting customers have at it.  Planning a menu for a year is boring.  Getting the new menu out, serving the food, and getting feedback is exciting.  So don’t wait too long- you’ll smother your sparks if you do.

If you absolutely have to work on long-term projects, try to dedicate one day a week (or every two weeks) to small victories that generate enthusiasm.  Small victories let you celebrate and release good news.  And you want a steady stream of good news.  When there’s something new to announce every two weeks, you energize your team and give your customers something to be excited about.”

In my years of leading a university campus team toward a common vision… one of the best things we did was celebrate.  We celebrated small wins, big wins, and maybe not even wins.  We always looked for a reason to celebrate.

Within that season, we divided each week into its own portion.  We asked the question, “What would be a huge win for the first week?” --and asked the same of each following week.  At the end of each one, we celebrated the things that were accomplished toward that win during the week- even if it was something that felt small.  We celebrated everything we could find.  The big celebration happened, however, after the first six weeks were complete.  We took an extra day to rest and we spent some additional time celebrating all that had happened.  Our goal was to expand the Kingdom for the King's name and not our own. No small feat.

Each quick win moved us out to greater steps of faith to see what could happen next.  We didn't want to smother the sparks. There were some weeks where we had to look fairly hard for wins.  But, we could always find something- even if it was a difficult thing that taught us something good.

So, plan away for five years out from now.  We need that, too. But don’t miss out on asking, “What would be big-time this week?”
Then go crazy when it happens.
Posted by Shawn McGrath at Monday, August 23, 2010