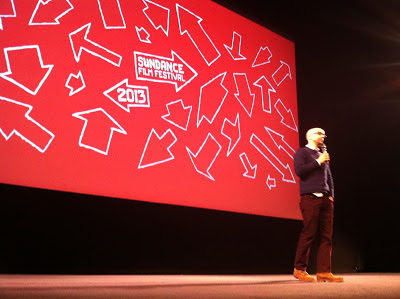 Sundance.  Story telling mecca for the independent film maker.  It also boasts that it's "the first word in culture every year".  This is a photo I snapped of director Jim Rash (also of tv's "Community") answering questions after showing his film, The Way, Way Back.  One writer said it has been the recipient of "the biggest wet sloppy audience kiss at Sundance".  Funny.  Heartwarming.  Awkward.  Did I mention funny?

One of more fascinating parts of Sundance was hearing the directors share the "whys" for making their movie and then answering questions about it from the audience.  In Jim Rash's case, he also played a supporting role as an actor in the film.