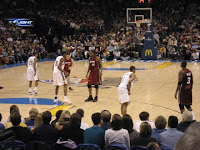 Just in case you haven't noticed, the NBA now lives in Oklahoma City. Call it a long-time inferiority complex, but it makes my heart swell to know that the OKC where I grew up has arrived on the national map. But, that's another point altogether.

A few weeks ago, I got to sit with a friend in his very good seats at the Ford Center to see the OKC Thunder take on the Miami heat. That night, the opposing team could have been called the Miami Flash because Dwayne Wade AKA "Flash" was by far the best player in the building. He simply took over whenever he needed to. Above is a pic I took right before he drained a 3. One of many that night. Fittingly, he's number 3.

Last night, D-Wade (who has become a favorite of mine over the years) dropped 46 points on the Chicago Bulls in a double-overtime win. But, it's HOW he did it that was exemplary. He hit a 3-pointer at the end of the first half, he hit a 3-pointer to send it into overtime, and he hit a 3-pointer to win it with no time left in the second overtime. Single game stats he put up last night (46 points/12 assists/6 rebounds/4 steals/3 blocks) haven't been seen in more than 20 years... except for that time Wade did it a few weeks ago.

In a Kobe and LaBron frenzy for MVP, Dwayne Wade is not just a flash in the pan. He just might walk away with the honor.
Posted by Shawn McGrath at Tuesday, March 10, 2009